We put Yogi outside while we were having dinner. He scratched and barked to come in only stopping when told no. I finally got off my arse and ran out there to take the shots and it was as if someone had given the puppy an espresso.

He wanted to PLAY...until he realised I was offering to let him back inside. He's cottoned on now though. He went to run in, looked up at me stopped and sat down with that "Please, Aunty Anne?" look. He's such a cutie pie. But, he has to learn to sit before he comes in. It's about him knowing who the boss is. (I'm sure he's tossing up between me and Yattie as the alpha. Mum's just the treat giver.)

We took him for a walk today. Katt was well impressed how he pulled her arm out of her socket and up the hill. Well, she was impressed until the saw the guard dogs in the yard across the road. He did not give one hoot about what she wanted then. He was going across there to bark at them no matter what she did. Like she said it's times like that you worry the harness will slip. We live in a main road. It would not be a good thing for him to bolt across the road. This is one of the reasons I want him to go to obedience. He'll learn to listen to her despite the distractions that only 40 other puppies can give.

I can't believe it's been over 3 months now. 6 months of this project to go. I don't know what will happen after that. Perhaps Katt will continue it on herself. I'll be away for a month so I won't be taking any shots of him. Karen and I have decided on which tour we're doing in China. A private tour for under $1000 each. Just the two of us :O I've never been on a private tour - or to China - so that should be interesting. Many thanks to my good friend Karen for making it all possible. Please send all the good thoughts/prayers you can muster her way.

Anyway, this is Yogi's blog I know. 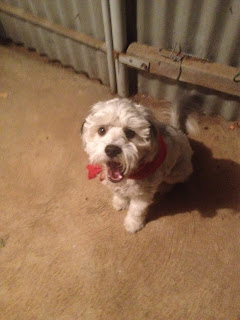 Yogelaaaddiiiihooo!!
(We call it the Yogi Yodel) 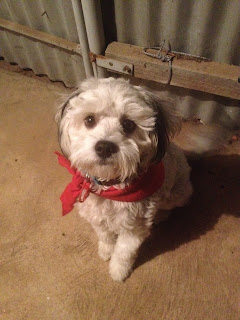 What do you mean they won't let
Australian dogs enter the Eurovision Song
Contest? Don't they know how cute I am?