I chucked away to myself when I was in the pet shop today. I like this pet shop as it only has stuff, no animals. Means they're not supporting puppy mills. We often joke about how Yogi holds his smaller toys like it's a dummy.

They had dummys on special for $3.25. I thought now that's worth making Katt laugh her arse off. (I'd tell you about another time I spent under $3 which was well worth it but... well... this a G rated blog. Let's just say that $3 gave me about 3 years of entertainment. Love you Savvy!)

I brought it home and gave it to him. He was in love. So in love he refused to take it over to Katt to show her - and within 5 mins he had chewed through the ring on it. However, the rest of it remains intact. The way he picked it up and tossed his head as he walked past Katt had us both in stitches.

He was so in love with his dummy that he refused to look up at me except for once. It was funny the way he realised he was looking at me as I was using the camera and he lowered his head to chew on the dummy some more quick smart. So, I'm afraid while my words are long the photos of Yogi are short today. 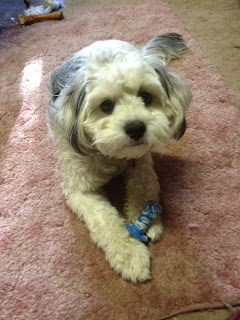 I shall love, hold and chew him
And I shall call him DumDum
And he shall be my DumDum